How Disney evolves from Mickey Mouse into a modern media company?

Join Yellow Bees on Telegram to get updates on interesting business stories & insights.

If you think that The Walt Disney Company is all about Mickey Mouse, Disney Princess, Disneyland, it’s like assuming Amazon is just an online bookstore. After the death of the legendary Walt Disney in 1966, it marked the end of an era for the company.

The company’s performance was generally lacklustre from then until the acquisition and merger of the American media company Capital Cities / ABC Inc. in 1996. Besides the media assets including ESPN, the deal was significant as Capital Cities / ABC’s then President, Bob Iger was brought into the Disney umbrella.

Bob was later promoted to the CEO of Disney in 2005, he has led Disney to become a modern media company throughout his 15 years tenure as the CEO. He has strong leadership qualities, he believes in the business of creating possibilities for greatness instead of playing it safe as a corporate leader.

Within his first year as Disney’s CEO, Bob has managed to convince Steve Jobs to sell Pixar to Disney at $7.4 billion in an all-stock transaction. Steve Jobs was then transitioned to Disney’s board of directors as its largest individual shareholder, with a 7% stake.

It was a time when Disney Animation was not doing well and Steve didn’t have a great relationship with Disney and Bob’s predecessor. To tell great stories, you need great talents – those talents were brought into the Disney umbrella while maintaining Pixar’s identity.

This was Bob’s first achievement in Disney by reviving the animation business – one of the most important assets of Disney’s traditions. After steadying the ship, Bob and Disney had identified Marvel and Lucasfilm as the two biggest IPs for Disney to pursue.

Bob tried to first move for Marvel but Marvel’s then owner, Ike Perlmutter, was a mystery figure. Ike is a former Israeli military, a reclusive person who rarely appeared in public or allowed pictures of himself to be taken.

Even as the CEO of Disney, Bob found it difficult to get a meeting with Ike and only managed to meet him via a connection after months of trying. Through shrewd negotiations and getting Steve Jobs to vouch for Bob and Disney, a deal valued at $4 billion was sealed to acquire Marvel Entertainment in 2009.

The acquisition of Marvel has defied the skeptics with huge successes with the Avengers installments, and most notably Black Panther and Captain Marvel. Bob and Disney believed in the importance of showcasing diversity rather than the assumption of black-led or female superheroes never drive big box offices.

So, what’s next after Marvel? George Lucas’s Star Wars. Bob reasoned to George as he doesn’t have direct heirs who are going to run the company down the road. Disney can be the one who protect and carry on George’s legacy, while George was not ready to sell at first but he was convinced of what Disney has done to Pixar.

Bob understood perfectly that it wasn’t a negotiation to buy a business, he was negotiating to be the keeper of George’s legacy. After difficult negotiations especially on George’s creative involvements, Disney had acquired Lucasfilm with $4.05 billion in 2012.

If you don’t innovate, you die

Bob was aware that “if you don’t innovate, you die”, Disney had to start delivering content in modern ways amidst the technology disruption in its media business. In 2016, Disney did attempt to acquire Twitter but pulled out due to concerns over abuse and harassment on the service.

Disney had instead bought a 33% stake in BAMTech, a streaming media provider spun out from Major League Baseball’s media division. Disney then increased its stakes in BAMTech to 75% in 2017 and announced its plan to launch a video-on-demand service, which is known as ESPN+ and Disney+ today. 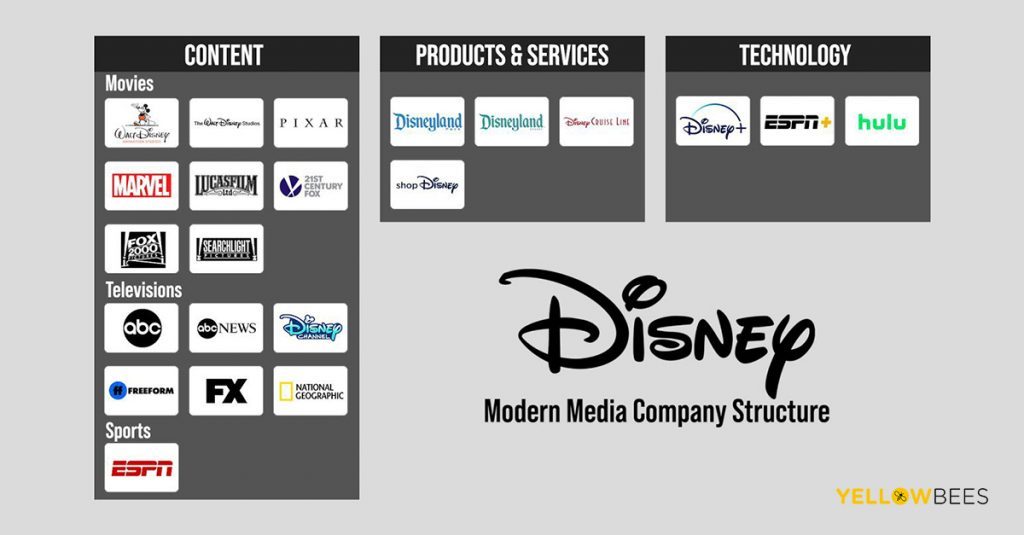 When Bob stepped down from the CEO in 2020, he had built Disney into a huge modern media company with three divisions. The three content groups are the fundamentals of the company, namely Movies, Televisions, and Sports.

As you would’ve expected, Disney makes tons of money from their content through the consumer products, merchandise, cruises, resorts, theme parks, etc. The last piece of the puzzle is the technology arm which helps to distribute the content directly to the consumers via video streaming service.

Bob envisions that content people should focus on creativity, while tech people focus on distribution and generating revenue. Putting the right names at the right places is crucial for Disney to become the global content powerhouse today.

Read more on 30 lessons by Bob Iger for business leaders.